In this podcast, I look at 3 different study methods when it comes to listening practice and look at the advantages and disadvantages of each one.

Listening to English but not using your brain to interpret it

Advantages: It’s very easy to do and requires very little effort. You can do it in any amount of free time you have during the day. Even a few minutes here and there can add up to a lot at the end of the day. It may also help you get used to the sound of English.

Disadvantages: Many studies suggest this doesn’t really help with the acquisition of new words. Something that requires little effort will probably have little result.

Advantages: This is an excellent way to get phrases and vocabulary stuck inside your head.

I still remember phrases learnt this way form several years ago. Studying along with the intonation of the voices helps cement it in your memory too.

Disadvantages: This is very time-consuming and it can get boring listening to the same audio again and again. Also if you’re doing it to a TV show you enjoy then doing this may ruin it for you.

1. Listen to a podcast or audio carefully and try to understand everything that’s being said.

2. When you hear words you don’t know, you can look them up in a dictionary app, but this is not necessary.

Advantages: It’s a good middle-ground. It’s not very time-consuming but also you are actively using your mind to interpret the audio. It’s a good way to learn some new words if you have the time to use a dictionary too.

Disadvantages: It can be frustrating if you are listening hard but don’t understand anything. You may only hear some phrases once so, unlike study listening, there is no repetition to help you learn. 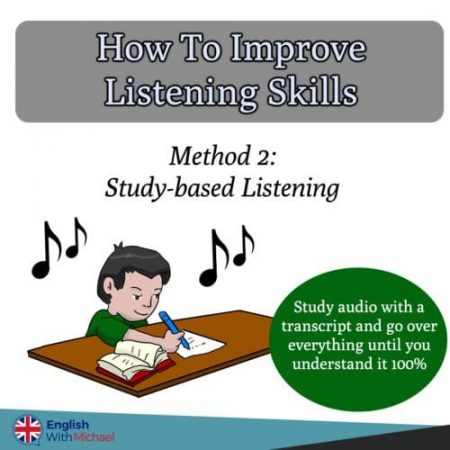 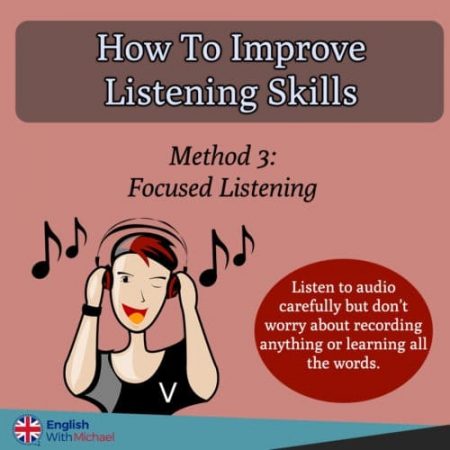 Find What Works Best for You

Find the way that works best for you. (I prefer focused listening)

I recommend trying to listen to English at a natural speed. When you are a beginner you can listen to slow English, but try to find native materials as soon as you can because it’s important to learn materials that sound natural.

Slow English is useful for helping understand vocabulary and grammar, but if you stick with this for too long it could harm your pronunciation and make the transition to natural speeds difficult in the end.

Make a goal to listen every day for 5 minutes minimum. Don’t try to make a 2-hour goal that you will not always be able to complete. It should be fun, not a chore!

Listen to podcasts on the go! (like this one of course)

For listening material, find a TV show you like and head over to https://www.opensubtitles.org to find the subtitles in English. You can read along while you listen and go back if you miss something.

English In The Media

Everyone now would be a good time to freshen up because I’d like everyone to meet in the conference room in 5 minutes and I suggest that you bring a snack because we might be in there for a while.

Freshen up – To make something newer or more attractive

It doesn’t take a genius to know that any organisation thrives when it has two leaders.

To Thrive – To flourish, to succeed in a certain environment

Jim: I just think that maybe they’re eating large amounts of the day.

Michael: You know what eats a large amount of the day are naps? You go to sleep it’s light out, you wake up it’s dark. That’s the whole day. Where did that day go? I have no idea!

Jim: You mean on the weekend?

Find the answer at the end of the podcast